When Bill Lawson began to collect information of the families of the Outer Hebrides he was faced with the challenge of how to preserve the information he was gathering. There was also the problem of differentiating between the large numbers of persons of the same name. His solution was to begin a saturation coverage of all the families of the Islands, and to record them in family chart form. 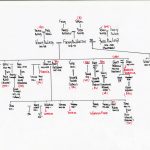 The database he took was the 1851 census – the earliest reliable resource for all the islands – and he used the data there to commence a family chart page for each family, each with an unique reference. Information from civil registers and later census returns was then added, with every marriage entry cross-referred to the wife’s page.

Information from Church Registers and estate records was then used to take the trees further back, and information from oral tradition used to enhance and in many cases correct the data, to take most family charts back to the 1750s, and many much further.

For families who left the islands before 1851, similar charts have been constructed, but in most cases less information is available, although there may well be a cross-reference to a family chart in one of the emigration areas.

So far, between the Outer Hebrides and the main emigrant areas, Bill has compiled some 27,000 family charts!

A typical family chart will commence with the family in 1851, expanded sideways and backwards as far as possible, and brought down usually to the mid 1950s. How much information will appear on the chart will depend on how many male children the head of house in 1851 had, how many male children his sons had, etc, and whether they remained on the islands. (This is not a case of male chauvinism but a recognition that it is in the male line that the surname is usually transmitted!) If children had their own households in 1851 the cross-reference will be shown, as in all cases of marriage within the islands.

All pages are in Bill Lawson’s own handwriting, but how much is shown on a particular page depends, not on him, but on the extent of proliferation of the 1851 family!