The Outer Hebrides or Western Isles of Scotland

The islands of the Outer Hebrides can be numbered in the hundreds, but of these there are six main islands – Lewis, Harris, North Uist, Benbecula, South Uist and Barra.

Lewis is the north-most and largest of the islands. It comprises four parishes – Barvas, in the north; Uig in the west, Stornoway in the east and Lochs in the south-east. Most of the island consists of low, rolling peat-moors, though there are mountains in Uig. Around the coasts there are cliffs and sandy beachs, and almost all the towns are on the coast, including the main town in the Islands – Stornoway – which has the ferry port and airport. The main off-shore inhabited island is Great Bernera, but other smaller islands were inhabited in the past.

Harris is the most mountainous of the islands, especially in the north. The machairs of the west coast present some of the most spectacular beaches in Europe, while the east coast contains the incredibly rocky landscape of the Bays. Its main villages are the ferry ports of Tarbert and Obbe (Leverburgh). The main off-shore islands were Scarp, Taransay and Pabbay. Scalpay is now connected by a bridge, while Berneray, though historically part of Harris now belongs administratively to North Uist.

North Uist has good agricultural land on the machairs of the west and north shores, with wide sandy tidal strands. In the centre of the island is a vast central peaty moorland. The main village is Lochmaddy, which is also the ferry port. Offshore are Boreray and Grimsay islands, and North Uist is connected by causeway to both Berneray and Grimsay, and through to Benbecula and South Uist.

Benbecula lies between North and South Uist, and is connected to both by causeway over the tidal strands. There is good agricultural machair land in the north and west, though the east has more moorland. Balivanich is the main town and is the administrative centre for all the Uists. It also has the airport. In older records, Benbecula is treated as a part of South Uist.

South Uist again has long strands and machairs on the west coast, with higher hills to the east. Iochdar in the north is connected by causeway to Creagorry on Benbecula, as is the Island of Eriskay to the south. Lochboisdale in the south-east is the ferry port to Oban, while Eriskay has a car-ferry to Barra. 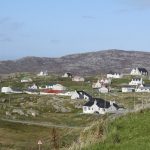 Barra is the furthest south of the main islands. It has both mountains and sandy beaches, and there is a ring-road right round the island. Eoligarry in the north has the airport, and nearby Ardmhor is the ferry port for Eriskay. The main town is Castlebay, which is also the ferry port for Oban. South of Barra, and connected by causeway is the Isle of Vatersay, and further south a chain of islands – Sanndray, Pabbay, Mingulay and Barra Head, all now uninhabited.