When Bill Lawson was first coming to Outer Hebrides over 50 years ago, he was fascinated by the amount of oral family history possessed by many of the old people – not just the ancient tales of the Feinn and the clans – though these were known also – but the history of their own families and their neighbours and relatives.

Allied to this was the use of patronymics – the system of naming a person by his father and his grandfather and so on. Most people knew their own patronymic back at least four generation, and frequently very much farther. If the purpose of a name is to identify a person, then a surname such as MacLeod, which must encompass at least 40% of the old families of Lewis and Harris, is of little use, whereas the patronymic Iain Aonghais ‘c Fhionnlaidh – John son of Angus son of Finlay – identifies immediately. 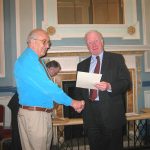 For a person who died before 1855 there are no formal records of parentage, whereas the patronymic can give a further two generations, at least on the male side.

Oral tradition is very keen also on preserving relationships, usually with great accuracy, and the fact that two people are known to have been third cousins, once removed, can provide a vital clue in the history of both families.

Oral tradition is now widely recognised as a valuable resource to the genealogist, and Bill Lawson’s work on collecting this in the Outer Hebrides was recognised by the Scottish Genealogy Society when they awarded him an honorary membership of the Society in 2000.